Is Wal-Mart The SoftBank Of E-Commerce Startups?

Walmart paid $16 billion for a 77 percent majority stake in Indian e-commerce leader Flipkart, implying an exit valuation of $20.8 billion. Flipkart is not only Walmart’s largest acquisition to date but also the largest ever acquisition of a VC-backed e-commerce company in the world. Per Walmart filings, in the fiscal year ended March 31, Flipkart generated net sales of $4.6 billion, more than 50 percent higher than the previous year, on a gross merchandise value of $7.5 billion. Interestingly enough, Walmart supports Flipkart’s plan to eventually go public as a majority-owned subsidiary of the U.S. retail giant. Such a stock offering could represent the largest tech IPO for an Indian company.

Over the past couple of years, the e-commerce industry has consistently witnessed record-setting M&As. Most notably, PetSmart bought Chewy.com for $3.35 billion in 2017, besting the prior record held by Jet.com when Walmart acquired it for $3.30 billion in 2016. Walmart-Flipkart’s union is worth more than 6 times those deals. As the industry matures, we believe M&A deal sizes will get bigger as Amazon, Alibaba, and brick and mortar retailers fight for e-commerce dominance. From 2013 to 2015, only two e-commerce deals per year surpassed billion-dollar mark compared to more than six deals over the past two years. The chart below shows major e-commerce M&A deals since 2014.

By contrast, e-commerce IPOs have lagged this M&A trend. Shares of Blue Apron and Stitch Fix, two of the most high profile e-commerce companies to recently go public, have also not performed well. Since 2015, M&A deals for e-commerce unicorns outnumbered IPOs 2-1, according to the chart below. 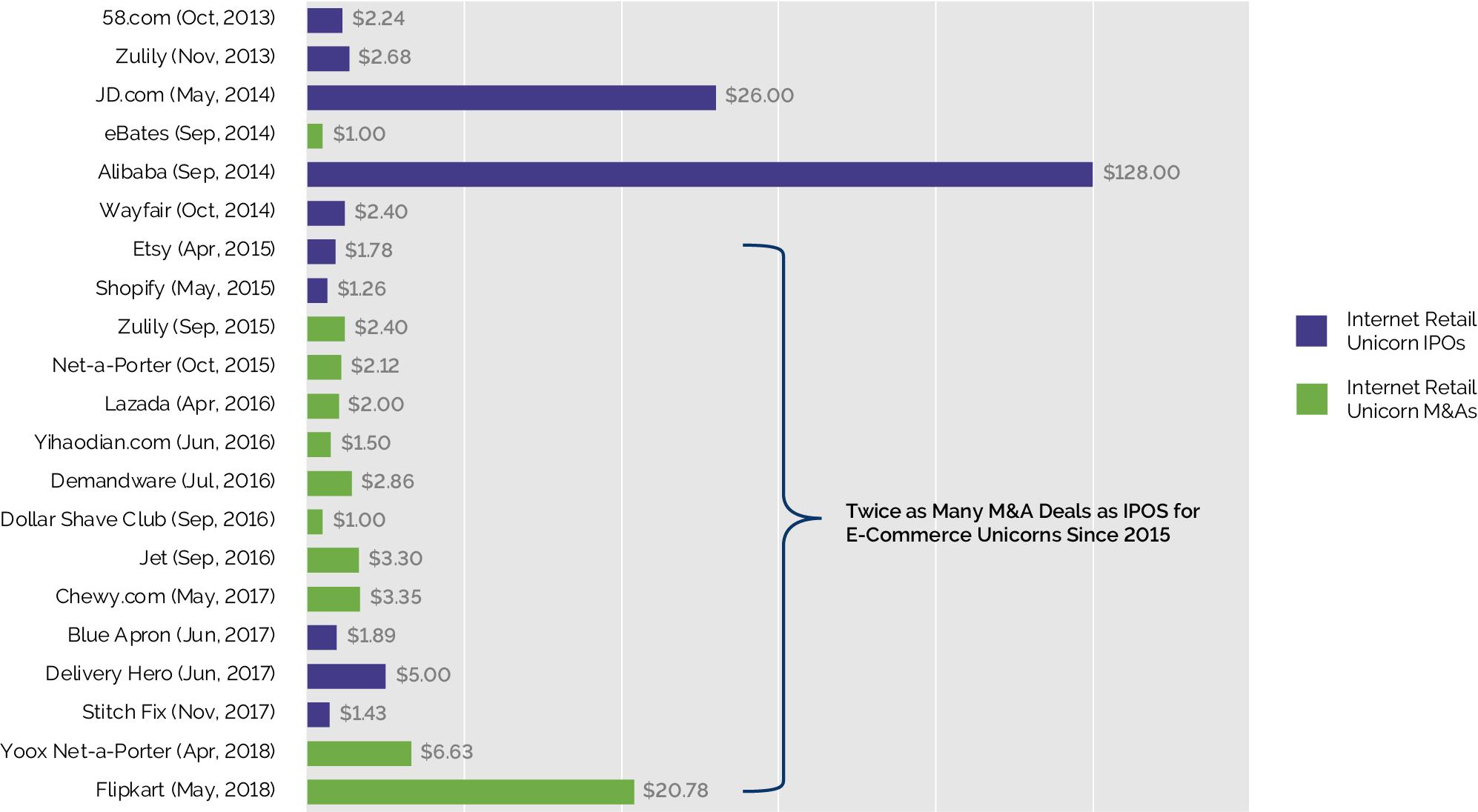 Also, Flipkart’s implied valuation of $20.8 billion represents a 35 percent to 50 percent premium above its most recent private valuation range of $13 billion to $15 billion. Post-IPO valuations of e-commerce startups have yielded mixed results.

While Walmart’s recent acquisitions may appear like a simple game of “catch up to Amazon,” the company is likely crafting a more subtle long-term strategy. Walmart has purchased digitally native and primarily mobile commerce brands focused on younger consumers, possibly to lure them to its physical stores in the future. In the chart below, we illustrate Walmart’s recent e-commerce focused acquisitions and investments. Clearly, Walmart has increased its deal making over the past couple of years amid growing pressure from online rivals. Walmart’s Jet.com acquisition certainly turned heads in 2016. But consider this: not only is Flipkart Walmart’s biggest e-commerce acquisition to date, the deal is larger than all of Walmart’s previous online retail acquisitions combined. 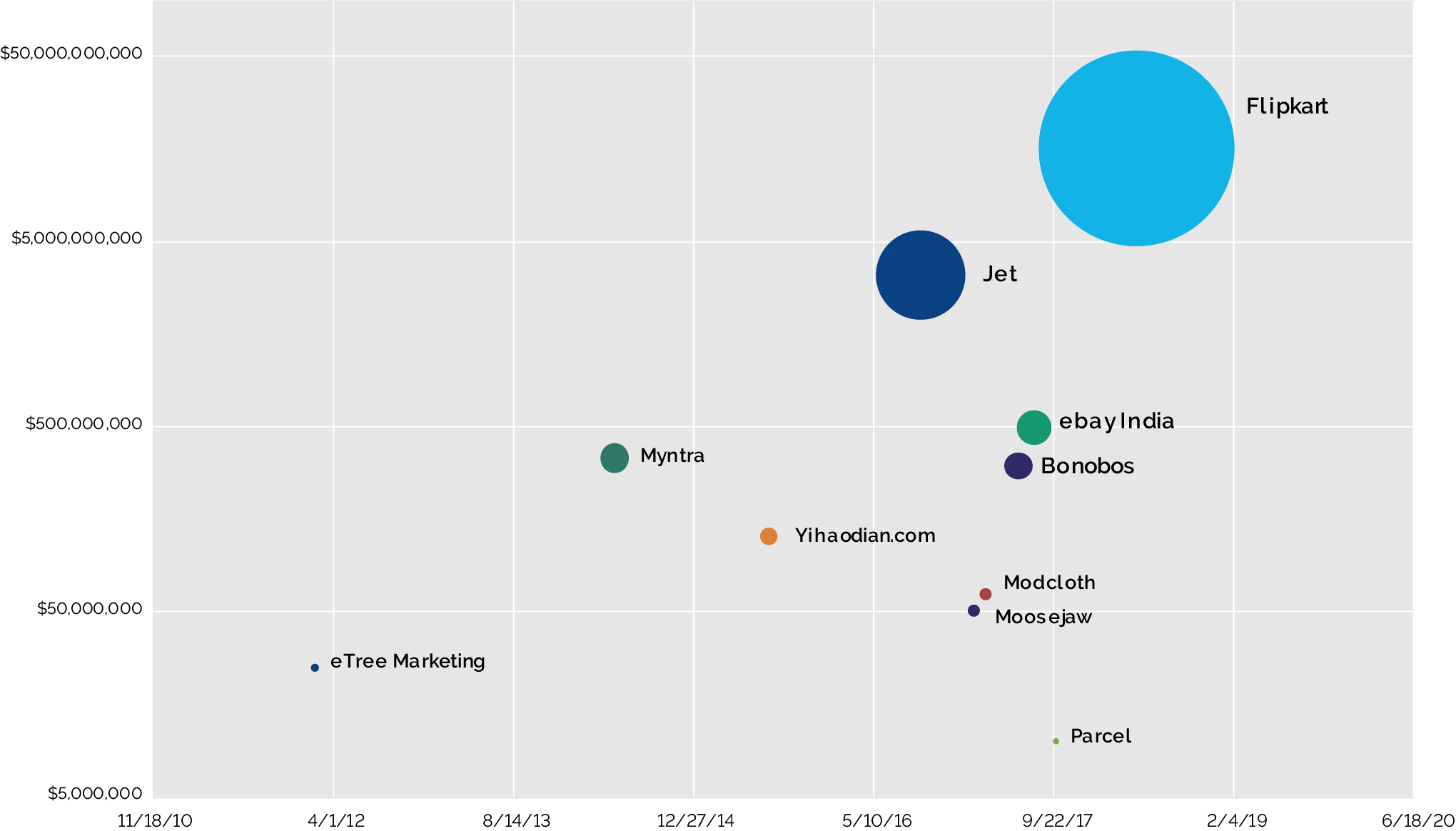 The Indian startup ecosystem has rapidly grown over the past decade. American and Chinese companies, including Tiger Global, Softbank, Alibaba, and Naspers, have made organic and strategic investments in over a dozen major Indian startups. In the taxi aggregation market for instance, the Indian start-up Ola competes fiercely with Uber even though they share a common investor in Softbank. As shown below, leading Indian unicorns excluding Flipkart boast a cumulative market cap of over $25 billion and raised almost $12 billion in private funding. We are closely watching these firms, along with rising Indian companies we call “Soonicorns,” because of their innovative business models, rapid growth trajectories, and fund raising track records to date.

“India is one of the most attractive [retail] markets in the world” said Doug McMillon, Walmart’s president and chief executive officer (May 9, 2018).

Nevertheless, the current market opportunity for such companies may not justify such lofty valuations. According to Forrester Research, the Indian online retail market totaled $20 billion in 2017 (2.4 percent of total retail market in India), which is still relatively small compared to older, better penetrated markets. But beyond market size, investors really want growth. India is home to a growing middle class, which is fueling household spending growth on par with that of China and more than the mature U.S. market. Over the next five years, analysts predict more consumers will gain access to the Internet for the 1st time than the entire U.S. Internet population. From 2017 to 2022, estimated online retail sales in India will grow more than 150 percent to more than $73 billion. Overall, we believe India’s private tech ecosystem trails its Chinese counterpart by about 8 to 10 years, a possible upside for investors. As shown below, China is currently the leader in the number of e-commerce unicorns and the percentage of total market cap, followed by the United States. Savvy investors should closely watch developments and opportunities in the Indian e-commerce market as the country continues to grow into a formidable economic power.