Unicorns Charge Ahead in 2018

As 2018 comes to a close, the research team here at SharesPost can’t help but notice what we believe has been a truly historic year.

For private technology growth companies and the ongoing development of private capital markets, 2018 was another year of soaring valuations, record numbers of new unicorns in the U.S. and China, and significant capital inflows. Notably, VC funds grew larger, and some were transformed into “unicorn funds,” those with more than $1 billion in investable capital. VC funding continued at an accelerated pace. Meanwhile, private growth investors enjoyed one of the strongest liquidity environments in recent times, driven by healthy IPO and M&A environments, and expanding acceptance for secondary markets. In short, it was a very good year.

The following are five highlights from a year that will likely be remembered as monumental.

No. 1. A record number of unicorns completed IPOs, yet private IPOs remain the primary source of growth capital.

During 2018, we tracked 19 unicorn IPOs compared to 16 in 2017 and four in 2016. Despite the very healthy IPO environment, VC-backed tech companies that went public this year raised more capital privately prior to their 2018 IPOs. 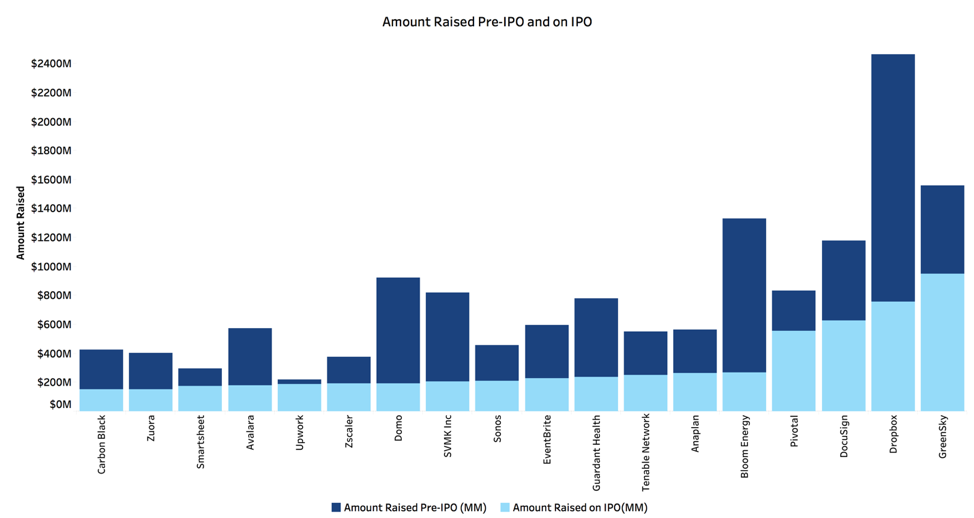 From a private funding standpoint, we estimate that VCs and private growth investors directed $77 billion in capital to U.S.-based tech companies in 2018. This level of funding has been unmatched since the dot-com days. However, this time the growth is fueled by Private IPOs – primary funding rounds raising over $100 million. We continue to believe that capital is moving quickly from public markets to private companies, which is motivating growth companies to stay private longer. Importantly, this trend remained unchanged during 2018 and is likely to continue in 2019. The median age of those companies that went public during 2018 was about 12 years.

It wasn’t just a robust year for IPOs. 2018 also proved to be a healthy year for M&A exits for SharesPost-tracked companies. The majority of M&A companies experienced a significant increase in valuation upon on acquisition. Eight saw their valuation jump over 100 percent! The average premium paid on acquisition for this cohort was about 82 percent. That figure doesn’t account for preferred share benefits, such as conversion ratios or liquidation preferences. The 82 percent figure illustrates what risk-on investors have long known: The private technology growth asset class outperforms most others, albeit with serious downside risks, like Birchbox’s 97 percent valuation collapse. 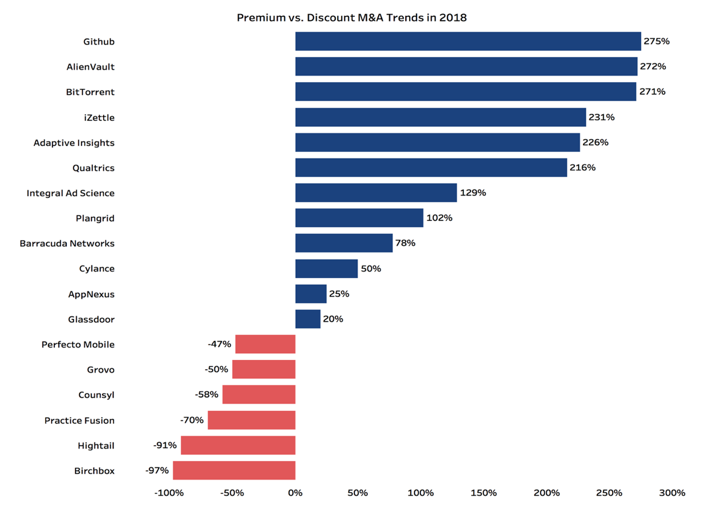 No. 3. Unicorn funds are likely here to stay, and a record number of unicorns are minted.

During 2018, VC funds became larger. We tracked nine $1 billion VC funds that closed in 2018. Over the past six years, the number of billion-dollar VC funds has risen to 50, by our estimate. As VC funds get larger, VCs tend to participate in larger investment rounds, leading to higher valuations and more unicorns. More unicorns were minted this year than any other year in the past decade. The rate at which unicorns are being created has now increased seven out of the last 10 years. 2009 saw no unicorns minted, compared with 57 in 2015 and 85 in 2018. 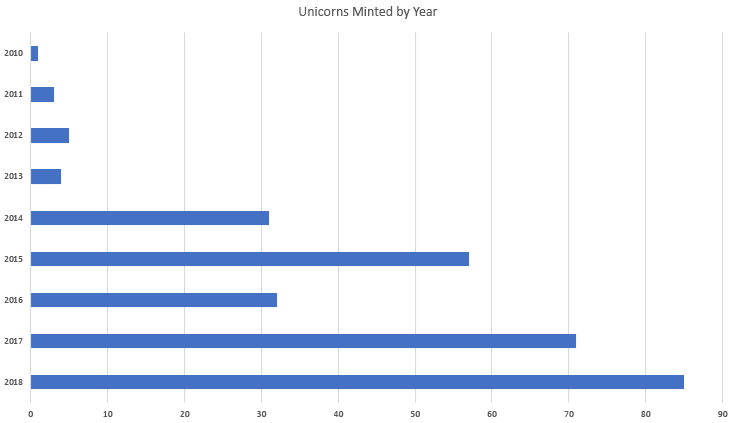 This year on average, seven new companies reached the unicorn mark each month. What’s more, the entire unicorn market grew to more than $1 trillion in valuation. The US and China are home to 75 percent of all unicorns.

No. 4. Softbank and China come to Silicon Valley.

Historically, Silicon Valley has been hegemonic in its ability to raise capital and develop innovative companies. Over the last few years, this dominance has been challenged by Asia. SoftBank is now the crown jewel in funding private tech start-ups; China now hosts 29 percent of all unicorns. The Valley will likely maintain its dominant position well in to the future, but SoftBank and Chinese unicorns will likely be an even greater force in 2019 and beyond.

It’s instructive to note Softbank’s growing influence in the venture ecosystem. In May 2017, Softbank announced the first close of its Vision Fund, which has over $93 billion of committed capital. Investors include sovereign wealth funds from Saudi Arabia and United Arab Emirates, as well as corporations such as Apple, Foxconn, Qualcomm and Sharp. We estimate the Vision Fund and its affiliated funds have invested $28 billion to $30 billion of their committed capital so far. That’s equivalent to over 35 percent of the overall VC funding in 2018.

As notable, the herd of Chinese unicorns grew by 26 firms in 2018, helping push the global market cap of unicorn firms past the $1 trillion mark. A total of 47 Chinese unicorns raised capital in 2018. The average amount raised by these firms was $655 million. Unicorns DiDi Chuxing and TuoTiao together raised $8.4 billion this year. That translated to about 30 percent of all funds raised by Chinese unicorns.

No. 5. Secondary markets continue to mature.

Secondary markets have traditionally been fragmented, opaque, and available only to VC insiders. These limitations have severely restricted access to potential investors. In response to the trend of companies staying private longer, secondary private-company marketplaces have emerged to increase investor and employee liquidity. At the same time, they offer accredited investors an opportunity to invest in disruptive and innovative companies.

The figure above outlines the transaction make-up by security type on SharesPost’s registered broker-dealer ATS over that past 10 years. The health of SharesPost’s marketplace is reflected in the mix of securities and the different types of users on the platform – VCs and supported issuer employees.